Under President Joe Biden, U.S. exports of goods and services have increased, but U.S. imports have grown even faster. The more than $3.4 trillion in imports in 2021 was higher than any other year on record, and total imports are on pace to be higher in 2022.

However, on multiple occasions since at least late October, Biden has given the false impression that rising exports means declining imports and fewer U.S. jobs being outsourced to foreign countries. 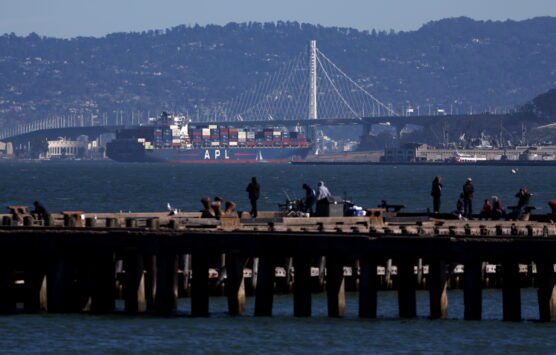 A container ship prepares to pass under the San Francisco-Oakland Bay Bridge on Oct. 24, 2022. Photo by Justin Sullivan/Getty Images.

“Exports are up, which means we’re making things here in America and shipping the products overseas rather than shipping the jobs overseas to make things overseas and bring them back home,” Biden said in Dec. 6 remarks on American manufacturing.

An expert in international trade economics told us the increase in exports doesn’t support Biden’s claims.

“Exports are up, which means we are making more things here in America and shipping them overseas,” Christine McDaniel, a senior research fellow at the Mercatus Center at George Mason University, said in an interview. “But that’s really all it means. It just means that demand for our goods and services from abroad is up. It does not necessarily mean we’re not shipping jobs overseas.”

She advised that the trade balance is not a definitive indicator of what is happening in the U.S. labor market.

Biden has been talking up U.S. exports in his speeches for weeks. In remarks from Michigan on Nov. 29, he made a similar claim that the U.S. is sending American-made products abroad “instead of shipping jobs overseas … like we’ve been doing for much too long. Like we were doing before I got elected president.”

Biden is right about U.S. exports, which have increased during his presidency.

Combined, U.S. exports of goods and services reached $2.56 trillion in 2021, according to data from the U.S. Bureau of Economic Analysis. That was up about $398 billion from 2020, when global trade declined due to COVID-19, and it was still about $10.4 billion more than in 2019, before the pandemic led to economic shutdowns worldwide.

Through the first 10 months of 2022, exports of goods and services were more than $415 billion ahead of where they were through the same 10-month period in 2021.

But Biden’s repeated claims about not offshoring jobs and shipping products back to the U.S. could have given the false impression that U.S. imports have declined, which is not the case. Like exports, imports of goods and services from overseas also have increased under Biden.

As of October, the goods and services deficit had increased $136.9 billion from the same 10-month period in 2021 — putting the U.S. on pace for an even higher annual deficit in 2022.

The trade experts we consulted said that when exports and imports increase, it’s usually a sign of both economic growth and increased consumer demand.

“With respect to the volume of imports and exports and the trade balance generally, it’s largely a result of macroeconomic factors,” William Alan Reinsch, a senior adviser and the Scholl Chair in International Business for the Center for Strategic & International Studies, said in an email. “Americans have always put a higher proportion of their income into consumption (as opposed to savings) compared to other countries, and if imports are up, it usually means the economy is growing and people are at least modestly confident about the future.”

As for an increase in exports, “that just means the demand for our stuff from around the world has gone up,” said McDaniel, of the Mercatus Center. “And when exports and imports go up, it largely reflects how U.S. manufacturers rely on those imported goods to make what they need to export. So it’s all kind of interrelated.”

On the other hand, she said that a rise in exports “does not necessarily mean we’re not shipping jobs overseas,” because around half of U.S. goods imports are items that U.S. manufacturers use to make the products they ship to other countries.

“In general, the trade balance is a very poor reflection of what’s going on in the labor market in the U.S.,” she said.

In a statement, a White House spokesperson said: “The President’s economic plan is creating good-paying jobs across the economy, including in the manufacturing sector. Under President Biden’s leadership, more than 10.5 million jobs and 750,000 manufacturing jobs have been created in just two years. Thanks to his Inflation Reduction Act, CHIPS Act, and Bipartisan Infrastructure Law, the country is making historic investments in manufacturing here at home, and we’re already seeing the results with historic investments in manufacturing in Arizona, North Carolina, Ohio, Michigan, and countless other states.”

That may be so, but it doesn’t mean that some jobs aren’t being moved out of the country. It also doesn’t address the president’s suggestion that imports are down instead of up.

29.09 / Everytown’s Misleading Ad on Johnson’s Votes ‘Against Funding for the Police’