Mail-in ballots have become a popular way to vote in the U.S. But the unfounded claim persists that mail ballots lead to rampant fraud and, if counted after Election Day, they are suspect. By law, many states don’t start counting mail ballots until after polls close, and some continue to accept them for days after Election Day if they are postmarked by that date.

A claim that seems to contradict itself — that counting all ballots will result in election fraud — was widespread in 2020 and has resurfaced ahead of this year’s midterms.

Nevertheless, the claim has lingered among election deniers and has had a mainstream resurgence recently.

For example, Fox News commentator Tucker Carlson — who hosts one of the most watched cable news shows, according to Nielsen — played a clip from President Joe Biden’s Nov. 2 speech on democracy and elections, in which the president noted the popularity of voting by mail.

“We know that more and more ballots are cast in early voting or by mail in America,” Biden had said. “And we know that many states don’t start counting those ballots until after the polls close on Nov. 8.”

“That means, in some cases, we won’t know the winner of the election for a few days — until after a few days after the election,” he said. “It takes time to count all legitimate ballots in a legal and orderly manner.”

But Carlson, looking incredulous, framed Biden’s remarks this way: “Here’s Joe Biden telling you that, thanks to the changes, the many changes, Democrats have made to our system of voting — all of which make voter fraud easier to commit — we may not know the results of the elections for a few days. But don’t be alarmed. Everything is completely on the level. And whatever you do, do not ask questions or else you’re a criminal.”

On Twitter, Texas Sen. Ted Cruz — who had challenged Trump in 2016, but later became an ally — posted a suggestive version of the claim, inaccurately saying: “Why is it only Democrat blue cities that take ‘days’ to count their votes? The rest of the country manages to get it done on election night.”

And a popular conservative Twitter account posted a similarly suggestive version of the claim: “Funny how we could easily count every vote in every state on election night until a few years ago.”

False claims and conspiracy theories — particularly those aimed at the integrity of U.S. elections — have been bouncing around in partisan echo chambers for at least two years. So, many of the most common claims — like this one — are now familiar enough to the target audience that those who push them don’t have to be explicit; they just have to make a suggestive reference to get the point across.

But at least one conservative commentator on Facebook is still spelling it out. Lars Larson, whom we’ve written about before, wrote in a lengthy post on the topic that counting ballots and reporting the results after Election Day is “how you cheat when your party is about to lose a major election.”

Like the others, Larson questioned why the vote count couldn’t be completed on election night, saying, “A hundred years ago, America with no special technology or computers managed to get national elections counted the same day. In fact, prior to 2020, almost all elections produced a result on election night.”

The problem with all of these posts is that they misrepresent the process and falsely suggest that there is something untrustworthy or nefarious about tabulating mail-in ballots after Election Day.

What Counts and When

And, according to the NCSL, 19 states accept and count mailed ballots after Election Day as long as they are postmarked on or before that date.

Contrary to Cruz’s claim that “only Democrat blue cities” take “‘days’ to count their votes,” states that traditionally vote Republican — such as Alaska and Mississippi — are among those that don’t allow tabulation to start until polls close on Election Day. Both states also accept mailed ballots that arrive days after Election Day, as long as they are postmarked on time.

It is true, though, that Democrats are more likely to vote by mail than Republicans, which can lead to the so-called “red mirage” on election night — meaning that early results based primarily on in-person voting may favor Republicans before mail-in ballots potentially favoring Democrats are counted and reported.

Regardless of party affiliation, though, it’s reasonable to expect that the outcome wouldn’t be available until after election night if mail-in ballot tabulation doesn’t begin until then and if appropriately postmarked ballots continue to be accepted after Election Day. The winner of the presidential race in Alaska wasn’t called by the Associated Press in 2020 until Nov. 11, eight days after the election.

Another important factor is the increasing demand for mail-in voting.

Voters’ use of mail-in ballots has grown steadily since the early 1990s, according to a report from the Massachusetts Institute of Technology Election Data + Science Lab.

By 2018, which was a midterm-election year, mail-in ballots made up more than 25% of total voter turnout, according to a report from the U.S. Election Assistance Commission.

Not surprisingly, the demand sharply increased in the 2020 election, which was held in the midst of the global COVID-19 pandemic before vaccines had become available. In 2020, 43% of voters cast their ballots by mail, according to the U.S. Election Assistance Commission’s report on that election.

Requests for mail-in ballots this year remain high, but not as high as 2020.

For example, 1.4 million voters have requested mail-in ballots for the 2022 election in Pennsylvania. That compares with 3 million who did so in 2020. (Pennsylvania is a key state that could determine control of the Senate next year. Republican Sen. Pat Toomey chose not to run for another term, leaving a close race between Lt. Gov. John Fetterman, a Democrat, and Dr. Mehmet Oz, a Republican.)

The Philadelphia Inquirer has reported that results from this year’s election shouldn’t take as long as they did in 2020. The newspaper predicted that most votes will be reported on election night, with the “vast majority” being counted by midday on Wednesday.

That contrasts with 2020, when the results weren’t clear until the Saturday following Election Day.

The Pennsylvania Department of State, like others, had recommended changing the law to allow counties to start opening ballot envelopes to prepare them for counting before Election Day in order to cut down on the amount of time taken for tabulation.

But the Democratic governor and Republican-controlled Legislature couldn’t agree on implementing changes.

The fact is, mail-in ballots — like other forms of voting — are largely secure, and there is scant evidence of fraud. 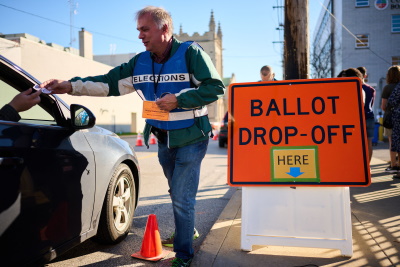 An official ballot collector for the Cuyahoga County Board of Elections gives a voter an “I Voted” sticker in Cleveland, Ohio, on Nov. 6. Photo by Dustin Franz/AFP via Getty Images.

Dozens of studies and analyses over the years have found that illegal voting is extremely rare and, notably, Trump’s own commission to study election fraud — which he disbanded before it produced a report — found no evidence of significant fraud. Matthew Dunlap, who was the Democratic secretary of state in Maine and served on the commission, wrote in a letter to then-Vice President Mike Pence, who chaired the commission, and Kris Kobach, the Kansas secretary of state who co-chaired it, that the sections on evidence of voter fraud in a draft report were “glaringly empty.”

Since the 2020 election, public officials have made similar statements about the lack of evidence to support claims of fraud in that election.

For example, former Attorney General Bill Barr, who was appointed by Trump, said in the weeks after the election that there was no evidence of fraud on a scale that would have affected the outcome.

More recently, during an interview with the House committee investigating the Jan. 6 riot, Barr reiterated that point and laughed off claims made in a video promoted by Trump called “2000 Mules,” which focuses on mail ballots to make the unsupported claim that there was widespread fraud in the 2020 election.

Various security measures ensure the integrity of mail-in ballots across the states, according to the Cybersecurity & Infrastructure Agency, a government agency that put together an overview of those measures, which include:

Requiring a signature and affirmation of a voter’s eligibility to cast a ballot under penalty of law. When voters request a ballot, election officials check the signature and other identifying information, as well as check to make sure that multiple ballots are not sent in response to applications made in the same voter’s name.
Requiring a signature on the returned ballot envelope. Some states even require a notarized signature, the signature of a witness or witnesses, or a copy of valid identification. When the ballot is returned, election officials verify the signature and any other required information before submitting the ballot for counting.
In cases where a voter shows up to the polls and is on record as having requested a mail-in ballot, state policies vary. “In most states, the voter would be required to cast a provisional ballot that could be later reviewed by election officials,” according to CISA. “In others, the voter may cast a regular ballot and any corresponding mail-in/absentee ballot returned in the name of that voter would be rejected. In all such cases, instances of potential double voting or voter impersonation could be directed to appropriate authorities for investigation.”

So, all the evidence shows that voting by mail is common and secure and — given the rules under which states have to count those ballots — it’s reasonable for counting to continue after Election Day.

05.10 / No Indication Breast Milk After Vaccination Unsafe, Despite Posts About New Study