American sportswriter Grant Wahl died unexpectedly while covering the soccer World Cup in Qatar, and purveyors of vaccine misinformation have suggested that his death was caused by COVID-19 vaccination. He actually died from the rupture of an aortic aneurysm that he didn’t know he had.

No vaccine or medical product is 100% safe, but the safety of vaccines is ensured via rigorous testing in clinical trials prior to authorization or approval, followed by continued safety monitoring once the vaccine is rolled out to the public to detect potential rare side effects. In addition, the Food and Drug Administration inspects vaccine production facilities and reviews manufacturing protocols to make sure vaccine doses are of high-quality and free of contaminants.

One key vaccine safety surveillance program is the Vaccine Adverse Event Reporting System, or VAERS, which is an early warning system run by the Centers for Disease Control and Prevention and FDA. As its website explains, VAERS “is not designed to detect if a vaccine caused an adverse event, but it can identify unusual or unexpected patterns of reporting that might indicate possible safety problems requiring a closer look.”

Anyone can submit a report to VAERS for any health problem that occurs after an immunization. There is no screening or vetting of the report and no attempt to determine if the vaccine was responsible for the problem. The information is still valuable because it’s a way of being quickly alerted to a potential safety issue with a vaccine, which can then be followed-up by government scientists.

Another monitoring system is the CDC’s Vaccine Safety Datalink, which uses electronic health data from nine health care organizations in the U.S. to identify adverse events related to vaccination in near real time.

In the case of the COVID-19 vaccines, randomized controlled trials involving tens of thousands of people, which were reviewed by multiple groups of experts, revealed no serious safety issues and showed that the benefits outweigh the risks.

The CDC and FDA vaccine safety monitoring systems, which were expanded for the COVID-19 vaccines and also include a new smartphone-based reporting tool called v-safe, have subsequently identified only a few, very rare adverse events.

For more, see “How safe are the vaccines?”

Grant Wahl, an American sports journalist, died of an aneurysm while covering the soccer World Cup in Qatar. He was 49.

Wahl collapsed during the quarterfinal match between Argentina and the Netherlands on Dec. 9, but his cause of death wasn’t reported until five days later, after the New York City Medical Examiner’s Office had performed an autopsy.

In the meantime, social media accounts that spread vaccine misinformation shared posts suggesting that his death was caused by the COVID-19 vaccine, despite having no evidence to support the claim.

Many of the posts referred to a long-standing, but unfounded, claim that the COVID-19 vaccines have been causing individuals — primarily young people and athletes — to die suddenly. We recently wrote about a viral video called “Died Suddenly” that relied on the same rumor to spin a wide-ranging conspiracy theory about world depopulation.

But there’s no evidence that Wahl died from a vaccine. Rather, he died from “the rupture of a slowly growing, undetected ascending aortic aneurysm with hemopericardium,” his wife, Dr. Céline Gounder, wrote in a post on his Substack on Dec. 14. 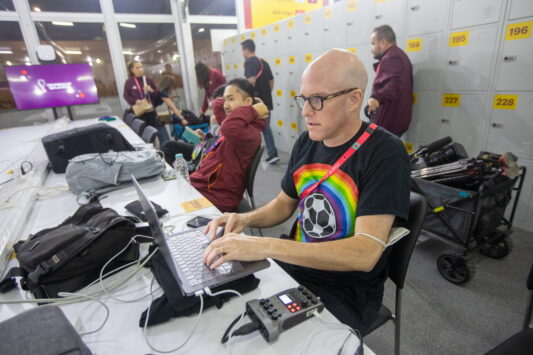 Gounder, who is a senior fellow at the Kaiser Family Foundation and a medical contributor for CBS News, explained on CBS Mornings what it means to have an aortic aneurysm. The aorta, she said, is “the big blood vessel that comes out of your heart — sort of the trunk of all the blood vessels” and an aneurysm happens when a blood vessel balloons. If the wall of the vessel is particularly weakened, it can rupture, which is what happened to Wahl.

“It’s just one of these things that had likely been brewing for years, and, for whatever reason, it happened at this point in time,” Gounder said.

Borrowed Headlines, But No Evidence

Despite Gounder’s explanation, claims attempting to tie Wahl’s death to vaccination persisted on social media, with Alex Berenson — a former New York Times reporter who has spread dubious claims about vaccines during the pandemic — joining the fray.

Shortly after Gounder posted on Substack, Berenson tweeted, in part, “It is awful to talk about this, but giant cell arteritis is both a risk factor for the aneurysm that killed him and a side effect of mRNA jabs.”

He included screenshots of various headlines apparently meant to support his claim.

First was a screengrab from Gounder’s post reporting that the cause of death was an ascending aortic aneurysm.

The page went on to list some of those contributing factors. They included: atherosclerosis, which happens when plaque builds up on the artery walls and counts high cholesterol and high blood pressure as risk factors; problems with the aortic valve, such as when a person is born with fewer flaps to regulate the flow of blood than is normal; genetic conditions such as Marfan syndrome, Ehlers-Danlos disorders, and Loeys-Dietz syndrome; and inflammatory conditions, including giant cell arteritis and Takayasu arteritis.

The only part Berenson included in the screenshot, though, was this: “Inflammatory conditions that may increase the risk of thoracic aortic aneurysms include giant cell arteritis and Takayasu arteritis.”

According to the New York Times, doctors are looking into whether Wahl may have had Marfan syndrome, which can result in being tall and thin with long arms, like Wahl.

The last two screenshots are the titles of two short articles in the medical literature that raise the possibility of a connection between COVID-19 vaccination and giant cell arteritis, or GCA. GCA is a treatable condition in older people that involves inflammation of the blood vessels.

One is a letter to the editor published in Clinical Rheumatology by six Spanish doctors in February, which describes an 83-year-old woman who developed GCA after her first dose of the Pfizer/BioNTech vaccine. With treatment, the woman successfully received her second vaccine dose and was in remission.

The letter calls for more study and concludes, “We think that while the overall incidence of vaccine-triggered autoimmunity is low, vaccinations should continue as planned. However, rheumatologists worldwide should be aware of autoimmune diseases as a new potential adverse event of mRNA vaccines.”

The other is a two-paragraph case report published in the medical journal QJM about a 74-year-old man who developed a prolonged cough and was diagnosed with GCA after his third dose of the Pfizer/BioNTech vaccine. His symptoms improved with treatment.

One larger pharmacovigilance study did find a potential safety signal for an increased risk of GCA following vaccination, although the risk was lower than what was observed with influenza vaccines. But even that study cautioned that its findings were preliminary.

“Further data are needed to confirm this signal,” it concluded. “Nevertheless, COVID-19 vaccine benefits dramatically outweigh this potential risk, which appears very rare relative to the billions of doses administered so far.”

All Berenson has done is cherry-pick parts of pages on the internet to create what looks like a relationship between vaccination and the ailment that killed Wahl. But none of the references he cited shows a causal relationship and, as the first one says, aneurysms can be caused by many different factors.

It’s worth noting that the average age for those who get GCA is 72, according to the Johns Hopkins Vasculitis Center. Almost everyone who gets it is over the age of 50 and it’s two to three times more common in women than men.

Like the similar claims that have tried to tie the deaths of various people to COVID-19 vaccination, there’s no evidence connecting Wahl’s death to vaccination.

19.05 / The Three Issues That Will Make or Break the Prosper Africa Initiative

22.11 / Why Black Americans May Be More Hesitant About Overseas Military Intervention

04.08 / Sorting Out the Partisan Tax Spin on Inflation Reduction Act

03.08 / What the Al-Qaeda Drone Strike Reveals About U.S. Strategy in Afghanistan