Criticizing the Biden administration’s recent prisoner swap of Russian arms dealer Viktor Bout for WNBA star Brittney Griner as “a one-sided disaster,” former President Donald Trump wrongly boasted that his administration “got 58 hostages released from various hostile countries without paying any money, or giving up anything.”

In fact, several of the deals resulting in the release of Americans held hostage or being wrongfully detained abroad came as a result of prisoner swaps during Trump’s time in office.

In November 2019, the Trump administration secured the release of American Kevin King and Australian Timothy Weeks, who were being held by the Taliban, in exchange for the release of three senior Taliban leaders being held in jails in Afghanistan.

In December 2019, the U.S. did a prisoner exchange with Iran, freeing Xiyue Wang, a graduate student at Princeton University who was serving a 10-year sentence in Iran on espionage charges. To secure Wang’s release, the U.S. freed Masoud Soleimani, an Iranian scientist convicted of export violations.

In July 2020, the Trump administration secured the release of Michael White, a Marine veteran jailed in Iran on charges of insulting the country’s supreme leader, in exchange for the release of a dermatologist convicted on export violations.

In October 2020, a deputy assistant to Trump helped broker a deal to free two Americans being held hostage by Iranian-backed militants in Yemen in exchange for the release of about 250 Houthi rebels being held in Oman.

Trump made the freeing of hostages held in overseas jails an administration priority.

In a Feb. 7, 2020, story for the New Yorker, Joel Simon, a fellow at the Tow Center for Digital Journalism at Columbia University, wrote that Trump “repeatedly pushed the boundaries of the no-concessions policy upheld by Republican and Democratic Presidents since Nixon. Trump’s style of resolving cases is more personal and more flexible.” In contrast to former President Barack Obama, Simon wrote, Trump “has gone out of his way to highlight his personal engagement in hostage-recovery efforts, welcoming hostages home on national television or inviting them to Oval Office photo opportunities. Trump seeks to showcase his skill as a deal maker and gain the political benefit of bringing Americans home.”

In a February 2019 review of a book on hostage negotiation by Simon, Jason Rezaian of the Washington Post, who was held hostage by Iran for 544 days, discussed the messy and morally fraught business of negotiating the release of overseas hostages and noted Trump’s successes on this front.

“No government has found a way to prevent hostage-taking, and the practice is getting more widespread,” Rezaian wrote. “But this is one area where the Trump administration has had some success. Andrew Brunson, a pastor detained in Turkey, was released in October 2018 after the United States imposed sanctions and tariffs. Joshua Holt, a Mormon missionary, was freed in May 2018 after nearly two years in a Venezuelan prison following separate meetings by two U.S. senators with President Nicolás Maduro.

“But a question still nags: Those releases came at what cost? For no hostage is ever freed for nothing,” Rezaian wrote.

In remarks on March 30, 2019, after the release of American oil worker Danny Burch from Yemen, Robert O’Brien, then the special presidential envoy for hostage affairs, touted Trump’s “unparalleled success in bringing Americans home without paying concessions, without prisoner exchanges, but through force of will and the goodwill that he’s generated around the world.”

But in the ensuing months, that would change, as we will detail below. 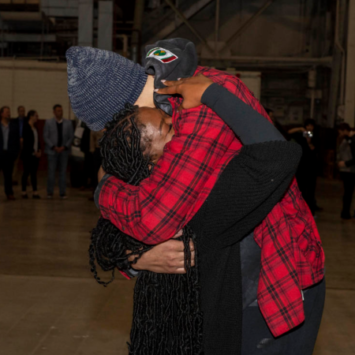 WNBA star Brittney Griner hugs her wife Cherelle after landing back in the U.S. from Russia. U.S. Army Photo by Miguel A. Negron.

Trump is certainly entitled to his opinion that the prisoner exchange of Bout for Griner was a bad deal. Trump and other Republicans have criticized Biden for securing Griner’s release and not Paul Whelan’s. Whelan, a former Marine, was detained in Russia in 2018, while Trump was president. In June 2020, Whelan was sentenced to 16 years in prison on charges of espionage. O’Brien told the Hill that he was trying to negotiate a deal for Whelan, but it fell through after Trump lost the election.

Trump says he “turned down a deal with Russia for a one on one swap of the so-called Merchant of Death for Paul Whelan. I wouldn’t have made the deal for a hundred people in exchange for someone that has killed untold numbers of people with his arms deals.” But it’s simply revisionist history to claim his administration “got 58 hostages released from various hostile countries without … giving up anything.”

Wang, then a Princeton graduate student, was arrested in Tehran in 2016 while doing doctoral research and convicted of espionage. He was in the fourth year of a 10-year prison sentence when the exchange occurred.

Wang was swapped for Masoud Soleimani, an Iranian stem-cell researcher who came to the U.S. to take a position as a visiting scholar at the Mayo Clinic. Soleimani was charged with “trying to export proteins used to culture cells for medical research without a U.S. license, a minor form of sanctions-busting,’” the New Yorker wrote. A senior Trump administration official at the time said Soleimani was about to be freed from prison as part of a plea deal, anyway.

“Thank you to Iran on a very fair negotiation,” Trump wrote. “See, we can make a deal together!”

Michael White, a U.S. Navy veteran, was visiting Iran in July 2018 to meet up with a woman he had met on the internet. White later said the visit turned out to be “a major, major trap.” He was arrested, charged with espionage and sentenced to 10 years in prison. According to Reuters, White was convicted of two charges — “insulting the country’s top leader and posting a private photograph publicly.”

He had served nearly two years of that sentence when the Trump administration negotiated his release on June 4, 2020, in exchange for the release of Majid Taheri (aka Matteo Taerri), an Iranian-American doctor convicted in 2018 of export violations.

Taheri pleaded guilty and served several months in jail, but was free on bond until sentencing when the deal was reached, the AP reported. The Justice Department dropped its charges against him.

“The United States government and the government of Iran have been negotiating the release of a U.S. citizen held in Iranian custody,” federal prosecutor Tracia King said at the hearing. “This case, and more specifically the sentence recommendation, is directly related to these negotiations.”

Trump touted White’s release on Twitter, stating, “I will never stop working to secure the release of all Americans held hostage overseas!”

The New York Times reported that before the exchange, there “had been intensifying speculation that Iran was preparing to release Mr. White, 48, a cancer patient.” During the height of the COVID-19 outbreak in Iran, and several months before the swap, White had been transferred out of prison and turned over to the Swiss Embassy in Tehran, He was staying in a hotel, though he remained on medical furlough and in Iranian custody.

After his return to the U.S., White met with Trump to thank him, and the meeting was featured on the first day of the Republican National Convention in 2020.

“Iran is an oppressive, extortionist, terrorist regime. You know what I’m talking about,” White told Trump. “But what you did, sir, you were able to get me out of that prison in record time. It was amazing.”

The case involving the release of American Kevin King and Australian Timothy Weeks in November 2019 is a little different from the cases of Wang and White, in that King and Weeks were kidnapped in 2016.

Nonetheless, Trump this week talked about his ability to secure the release of “hostages” without ever “giving up anything.” So King and Weeks fit the bill.

Freed in the exchange were three senior commanders of the Haqqani network, which was added to the State Department list of foreign terrorist organizations in September 2012 and is closely allied with the Taliban. One of the men was a younger brother of the Taliban’s deputy leader and son of the Haqqani network’s founder, the Washington Post reported.

According to the Washington Post, the Haqqani network “has been active in kidnapping foreigners and is believed to have seized King and Weeks.”

Announcing the release of King and Weeks, Trump praised then-Afghan President Ashraf Ghani “for his courageous support” and added, “Proud of my team!” The Washington Post reported that Ghani had earlier “announced the prisoner swap on live television.”

The Intercept reported in October 2020 that the Trump administration “secured the release of two other Americans, a businessman and a humanitarian worker, who were being held in Yemen by Houthis supportive of Iran. The latter deal was personally overseen by [Kash] Patel [a deputy assistant to Trump]; in return, according to press reports, he facilitated the release of nearly 250 Houthi fighters stranded in neighboring Oman.”

Freed were Sandra Loli, an aid worker held hostage for three years, and Mikael Gidada, a businessman held for nearly a year. The remains of a third captive, Bilal Fateen, were also released.

According to the Washington Post, “In exchange for the Americans, nearly 300 of the rebel group’s members were returned to Yemen, where some may reenter the battlefield and prolong a conflict that has become increasingly unpopular in Washington.”

The more than 200 Houthi fighters were captured by a Saudi Arabia-led coalition and were being held in Oman.

Although O’Brien did not mention the exchange, he did publicly thank “Sultan Haitham bin Tariq of Oman and King Salman of Saudi Arabia for their efforts to secure the release of our citizens.”