‘Unequivocal’ Evidence that Humans Cause Climate Change, Contrary to Posts of Old Video

There is “unequivocal” evidence that humans are causing global warming, the U.N. climate change panel has said. But viral posts revive a 2014 video of Weather Channel co-founder John Coleman falsely claiming “climate change is not happening.” The channel, which supports the scientific consensus that climate change is real, had distanced itself from Coleman.

A vast and growing body of scientific evidence shows that climate change is occurring and is largely caused by human activity, as we’ve written on multiple occasions.

In 2007, the United Nations’ Intergovernmental Panel on Climate Change concluded that the “evidence is now ‘unequivocal’ that humans are causing global warming,” the U.N. said in a press release at the time. The U.N. panel has repeated that finding ever since, most recently in an April report.

“Widespread and rapid changes” have occurred as a result of climate change and “many changes … are irreversible” for at least centuries, the U.N. climate panel said in another report issued in 2021.

“Many changes in the climate system become larger in direct relation to increasing global warming,” the 2021 report said. “They include increases in the frequency and intensity of hot extremes, marine heatwaves, heavy precipitation, and, in some regions, agricultural and ecological droughts; an increase in the proportion of intense tropical cyclones; and reductions in Arctic sea ice, snow cover and permafrost.”

As the effects of climate change become increasingly evident, the issue is also becoming increasingly political. Just weeks after the U.S. Supreme Court ruled in June to restrict the Environmental Protection Agency’s ability to regulate carbon emissions, President Joe Biden said he would take “strong executive action” to “tackle the climate crisis” if the Senate failed to act.

But social media posts continue to question the existence of global warming by reviving a 2014 interview on CNN’s “Reliable Sources” with climate change skeptic and Weather Channel co-founder John Coleman.

One Instagram post has the headline, “Weather Channel Founder Goes Savage on CNN for Network’s Climate Change Fake News.” A caption on the video clip says, “The climate change activist and movement is a fraud!” The post has been viewed more than 18,000 times.

A post on Twitter attached a slightly longer portion of the same Coleman interview with the caption, “Founder of The Weather Channel tells Brian Stelter climate change is a hoax.” The post has over 66,000 likes and more than 28,000 retweets.

In the video shared in these posts, Coleman said: “Climate change is not happening. There is no significant man-made global warming now, there hasn’t been any in the past, and there’s no reason to expect any in the future.”

Coleman’s claims are false, and so is the implication in the social media posts that he was an expert in climate science.

Coleman, who died in 2018, worked as a weather anchor for over 60 years, including on ABC’s “Good Morning America.” But he did not hold a degree in any scientific discipline. The CNN clip was one of many instances in which Coleman perpetuated climate change falsehoods.

In the CNN report, anchor Brian Stelter subsequently spoke with the Weather Channel’s then-CEO David Kenny. In that exchange, which the social media posts leave out, Kenny distanced the Weather Channel from Coleman’s claims and asked viewers to focus on the science.

“What I want people to know is that the science is pretty clear about climate change,” Kenny said. “We’re grateful that [Coleman] got [the Weather Channel] started 32 years ago, but he hasn’t been with us in 31 years. So he’s not really speaking for the Weather Channel in any way today.”

Kenny continued, “Our position is really clear, it’s scientifically based, and we’ve been unwavering on it for quite some time now.”

The Weather Channel had posted its statement on climate change a few days prior to Kenny’s CNN interview. In its statement, which was updated in 2017, the organization accurately said that “the majority of the warming over the past century is a result of human activities.”

As we’ve written, the theory of the greenhouse effect — that greenhouse gases such as carbon dioxide trap the sun’s heat in the atmosphere — has been repeatedly proven since it was first proposed in 1824.

The American Association for the Advancement of Science notes that about 97% of climate scientists believe human-caused warming is occurring. Similarly, NASA calls the fact that “Earth’s climate is warming” a matter of “scientific consensus.”

The Annual 2021 Global Climate Report, prepared by the National Oceanic and Atmospheric Administration’s National Centers for Environmental Information, found that the global annual temperature increased an average rate of 0.14 degrees Fahrenheit per decade since 1880 but “over twice that rate” since 1981.

“The years 2013–2021 all rank among the ten warmest years on record. The year 2021 was also the 45th consecutive year (since 1977) with global temperatures, at least nominally, above the 20th century average,” the report added.

The year 2021 marked the sixth warmest year recorded, despite the cooling effect of La Niña climate pattern in the central and eastern tropical Pacific Ocean. 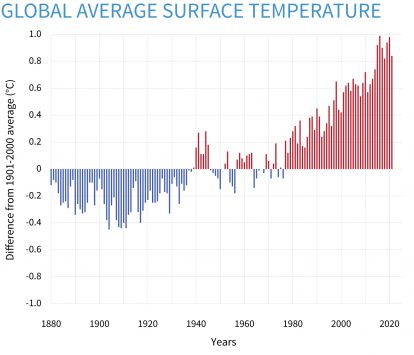 The NCEI annual report concludes that only the “human emissions of heat-trapping gases” can explain this increase in global temperature.

The IPCC, a U.N. body of 278 climate experts from 65 countries, in a report released in April attributed climate change to “more than a century of … unsustainable energy use, land use and land-use change, lifestyle and patterns of consumption and production.”

The panel warned that “without urgent, effective and equitable mitigation actions,” climate change will continue to threaten biodiversity, global health and economic growth. “[C]limate change poses a serious threat to development and wellbeing in both rich and poor countries,” the report said, citing such climate impacts as premature deaths, food insecurity and loss of land and infrastructure.

16.06 / The Brazilian Candidate: The Studious Cover Identity of an Alleged Russian Spy