To date, the benefits of COVID-19 mRNA vaccination outweigh the risks, which include a rare but increased risk of myocarditis, or heart inflammation. Social media posts, however, are citing a German autopsy study to misleadingly suggest otherwise.

No vaccine or medical product is 100% safe, but the safety of vaccines is ensured via rigorous testing in clinical trials prior to authorization or approval, followed by continued safety monitoring once the vaccine is rolled out to the public to detect potential rare side effects. In addition, the Food and Drug Administration inspects vaccine production facilities and reviews manufacturing protocols to make sure vaccine doses are of high-quality and free of contaminants.

One key vaccine safety surveillance program is the Vaccine Adverse Event Reporting System, or VAERS, which is an early warning system run by the Centers for Disease Control and Prevention and FDA. As its website explains, VAERS “is not designed to detect if a vaccine caused an adverse event, but it can identify unusual or unexpected patterns of reporting that might indicate possible safety problems requiring a closer look.”

Anyone can submit a report to VAERS for any health problem that occurs after an immunization. There is no screening or vetting of the report and no attempt to determine if the vaccine was responsible for the problem. The information is still valuable because it’s a way of being quickly alerted to a potential safety issue with a vaccine, which can then be followed-up by government scientists.

Another monitoring system is the CDC’s Vaccine Safety Datalink, which uses electronic health data from nine health care organizations in the U.S. to identify adverse events related to vaccination in near real time.

In the case of the COVID-19 vaccines, randomized controlled trials involving tens of thousands of people, which were reviewed by multiple groups of experts, revealed no serious safety issues and showed that the benefits outweigh the risks.

The CDC and FDA vaccine safety monitoring systems, which were expanded for the COVID-19 vaccines and also include a new smartphone-based reporting tool called v-safe, have subsequently identified only a few, very rare adverse events.

For more, see “How safe are the vaccines?”

Clinical trials, vaccine safety surveillance systems and follow-up studies have shown that the Pfizer/BioNTech and Moderna COVID-19 mRNA vaccines are remarkably safe. There is a small but increased risk of inflammation of the heart muscle or surrounding tissue, known as myocarditis or pericarditis, following mRNA COVID-19 vaccination, particularly in younger males after a second dose. But the condition is rare and, in most cases, resolves quickly.

Yet a study by scientists affiliated with the Heidelberg University Hospital in Germany published in Clinical Research in Cardiology in November is being cited on social media to misleadingly suggest the vaccines are unsafe.

The researchers examined autopsy data from 35 people who died unexpectedly within 20 days of COVID-19 vaccination and concluded that for two of them, vaccine-induced myocarditis represented the “likely” cause of death, while for three others, the condition was a “possible” cause of death.

Some experts, however, have questioned those conclusions — and even if valid, they don’t mean the risks of vaccination outweigh the benefits. On the contrary, numerous studies have shown the vaccines provide good protection against severe COVID-19 and death — and only rarely cause serious side effects. Studies have also shown that in most age groups myocarditis following vaccination is less frequent than after COVID-19, and clinically, most vaccine-related myocarditis cases are mild. This context was missing when many people shared the autopsy study online.

“Autopsies found that 5/35 people who died suddenly within 20 days of COVID-19 vaccination had myocarditis as a likely/possible cause of death,” Florida Surgeon General Dr. Joseph Ladapo tweeted on Dec. 2, linking to the study.

“These deaths aren’t captured by other studies because these patients never made it to the hospital…mRNA COVID-19 vaccines are far less safe than any vaccines widely used. When does sanity return to science? Why do scientists breathlessly defend this technology?” he added, in a tweet that got over 18,000 likes.

Ladapo also misleadingly said that the autopsy study was “consistent with Florida’s analysis,” referring to a discredited analysis performed by the Florida Department of Health. It purportedly found an increased risk of cardiac-related death following vaccination in younger adult males and was the basis for the state to no longer recommend the mRNA vaccines for that group in October. As we wrote at the time, experts in statistics said the analysis was flawed.

Ladapo’s tweet was followed by multiple articles, videos and social media posts suggesting the German autopsy report’s findings were alarming. The report was embraced by those who have been advancing the false narrative that the vaccines are causing widespread deaths. Its publication came just a few days after the release of “Died Suddenly,” a viral video that baselessly claimed the vaccines were causing people to suddenly drop dead in a plot to depopulate the world.

“Major New Autopsy Report Reveals Those Who Died Suddenly Were Likely Killed by the Covid Vaccine,” reads a headline in the Daily Sceptic, a website known for spreading misinformation.

“The fact that those who die suddenly after vaccination may have died from the hidden effects of the Covid vaccine on their heart is thus now firmly established in the medical literature,” the Daily Sceptic article continued, potentially leaving the false impression that deaths due to vaccination are widespread.

According to the German study, the researchers identified “acute (epi-)myocarditis without detection of another significant disease or health constellation that may have caused an unexpected death” in four patients. But experts who reviewed the study told us there is not enough evidence to prove that the deaths were caused by the vaccine, nor can the study be used to infer how frequently vaccine-related myocarditis is fatal.

“The temporal association of lymphocytic myocarditis following vaccination suggests but does not prove causality,” Dr. Leslie T. Cooper Jr., a myocarditis expert and chair of the Department of Cardiology at the Mayo Clinic in Florida, told us in an email.

Cooper added that the background rate of myocarditis is around 1 to 10 in 100,000 people per year. “Because we do not know the denominator of patients vaccinated in their region during this time, we cannot calculate the expected number of cases if there were no vaccinations,” he said.

“I think that it is not possible to prove that vaccination is really the cause of death of these people,” Dr. Karin Klingel, head of cardiopathology at the University Hospital Tübingen in Germany, told us in an email.

Other experts who reviewed the study for Health Feedback said the same.

While some social media posts claim that the study is a “major autopsy report,” the authors acknowledged that their study was “limited by the relatively small cohort size” and “does not allow any epidemiological conclusions in terms of incidence or risk estimation.”

The authors also noted that they “cannot provide a definitive functional proof or a direct causal link between vaccination and myocarditis.” Co-senior author Dr. Peter Schirmacher nevertheless told FactCheck.org in an email that the study “proves the link between vaccination induced myocarditis and death” and that it’s “the largest and most diligent and structured autopsy study that exists and it covers a collective that is not addressed anywhere by adequate expert autopsy assessment.”

According to the existing evidence, post-vaccine myocarditis is more frequent in males, particularly in those ages 12 to 24, after a second dose. The cases included in the German study, however, included three females, ages 50, 62 and 75; and two males, ages 46 and 55. Four of the deaths occurred after the first dose of the vaccine. 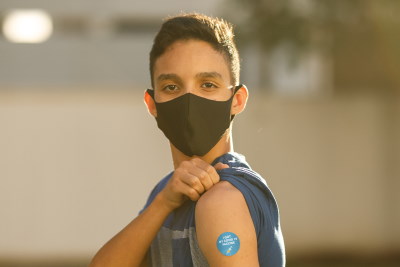 A boy shows his COVID-19 vaccine badge. Photo by Capuski via Getty Images.

Dr. Frank Han, a pediatric cardiologist at the University of Illinois College of Medicine, said on Twitter that the study establishes that the patients had myocarditis, but whether they died of an arrhythmia from myocarditis was less clear. He noted that some of the individuals “had pulmonary and vascular findings consistent with atherosclerosis and pulmonary congestion,” and based on what the authors included in the paper, “it’s unknown why they think atherosclerosis was noncontributory.”

As one expert told Health Feedback, more autopsies should be done, as they may be able to identify the risk factors for adverse events following vaccination, which could make vaccination even safer. But autopsy reports such as these aren’t evidence that the COVID-19 vaccines are too risky or that many people are dying from them.

Cooper, of the Mayo Clinic in Florida, pointed us to a recent publication from Hong Kong, which analyzed health records of vaccinated people, ages 12 years or older, hospitalized with myocarditis. Out of 104 patients hospitalized with myocarditis within 28 days of receiving a Pfizer/BioNTech vaccine, one died within six months of the diagnosis. That’s a mortality rate of about 1%, which according to Cooper, is a bit higher than what other case series have found. Even going with the 1% rate, Cooper said this would mean the risk of death from vaccine-related myocarditis would be 1 in 2 million to 1 in 10 million.

A study published in the Centers for Disease Control and Prevention’s Morbidity and Mortality Weekly Report in April found that the risk for cardiac complications including myocarditis, pericarditis and multisystem inflammatory syndrome was “significantly higher” after an infection with the coronavirus, or SARS-CoV-2, than after receiving an mRNA COVID-19 vaccine, for both males and females in all age groups.

“Even among males aged 12–17 years, the group with the highest incidence of cardiac complications after receipt of a second mRNA COVID-19 vaccine dose, the risk was 1.8–5.6 times as high after SARS-CoV-2 infection than after vaccination,” the study said.

11.08 / How Japan’s Startup Ecosystem Grew Alongside Its Large Firms