In young children, the Pfizer/BioNTech and Moderna COVID-19 vaccines are expected to primarily protect against severe disease. Both shots successfully met the set benchmarks for vaccine effectiveness, which involved comparing antibody responses to those of adults. Online posts critical of government recommendations for the pediatric vaccines, however, fail to mention these essential data.

How effective are the vaccines?

How effective are the vaccines?

All of the authorized and approved vaccines are effective at preventing severe COVID-19.

Against earlier forms of the coronavirus, the vaccines were highly effective at preventing symptomatic illness. For example, the Pfizer/BioNTech vaccine, which was the first COVID-19 vaccine to receive full approval from the Food and Drug Administration, showed a final efficacy of 91% against symptomatic illness in its phase 3 trial, meaning that under the conditions of the trial the vaccine reduced the risk of getting sick by 91%.

The Moderna vaccine showed similar results in its clinical trial, with a final efficacy of 93%. It has also received FDA approval.

Subsequent studies have demonstrated that the vaccines are effective under real-world conditions, including against the highly contagious delta variant. Against omicron, however, the vaccines haven’t fared as well and are much worse at preventing infection or mild disease. The shots are still good at preventing hospitalization or death, though, particularly if someone has received a booster dose.

Booster shots are recommended for most people, as these increase and prolong protection against severe disease and also provide some temporary protection against infection and milder illness. For instance, a Centers for Disease Control and Prevention study found that during the omicron wave, adults who had received two doses of the Pfizer/BioNTech or Moderna vaccines had a 79% lower risk of dying or needing a ventilator if hospitalized with COVID-19, compared with unvaccinated adults. Those who had received a booster vaccine dose as well had a 94% lower risk.

People over the age of 50 and people who are immunocompromised are also eligible for a second mRNA booster.

In June, the Food and Drug Administration authorized the first COVID-19 vaccines for young children: a three-dose Pfizer/BioNTech vaccine, for kids 6 months old through 4 years of age, and a two-dose Moderna vaccine, for 6 months through 5 years of age.

Both vaccines, which use messenger RNA, or mRNA, to trigger a protective immune response against the coronavirus, are smaller-dosed versions of the companies’ vaccines for adults, which were found in large, randomized controlled trials to be effective. Real-world evidence also has repeatedly shown the vaccines provide strong protection against severe disease.

As with the authorizations for other children, the primary way the FDA evaluated the COVID-19 vaccines for young kids for effectiveness was through a comparison of the children’s antibody responses to those of adults. If a similar percentage of vaccinated children produce antibodies — and in similar amounts — to vaccinated adults, then it can be inferred that the kids’ vaccine is also effective. This approach, known as immunobridging, is an established method that has been used for other vaccines, including those given to children.

Importantly, the pediatric trials were designed as immunobridging studies from the start — and were not necessarily meant to be able to provide good efficacy estimates of how well the vaccines prevent infection or symptomatic disease.

This is especially relevant because with the rise of the highly transmissible and more immune-evasive omicron variant, scientists don’t expect the vaccines to be very good at averting infections or mild illnesses. Instead, the vaccines are primarily useful in preventing severe disease.

An online post critical of the shots for young children, however, misleadingly skips over all of that. Instead, it calls Pfizer’s and Moderna’s data “extremely weak” and “inconclusive” and only mentions the lackluster or uncertain efficacy estimates from the studies, which were conducted during the omicron era.

“In the subgroup of children aged six months to two years, the trial found that the vaccine could result in a 99% lower chance of infection—but that they also could have a 370% increased chance of being infected,” the post said about the Pfizer/BioNTech vaccine. “In other words, Pfizer reported a range of vaccine efficacy so wide that no conclusion could be inferred. No reputable medical journal would accept such sloppy and incomplete results with such a small sample size.”

The piece, which was a July 14 guest post on former New York Times opinion columnist Bari Weiss’ Substack page, went on to feature Moderna’s efficacy figures, which it called “very weak” or “low.”

The reported efficacy numbers are correct (or nearly so — one of the Moderna figures is not the primary efficacy number). But as we said, that was not the only or even the main information regulators and outside experts used to evaluate the effectiveness of the vaccines. And as a former FDA official told us, focusing on those numbers misses the point.

The Substack post was co-authored by Dr. Marty Makary, a surgeon and public policy researcher at the Johns Hopkins School of Medicine who has previously spread misleading or unsupported information about COVID-19, and Dr. Tracy Beth Høeg, a physical medicine and rehabilitation physician in private practice in California. Høeg is also a consultant epidemiologist for the state of Florida, which is the only state to recommend not vaccinating healthy children against COVID-19.

The post was subsequently shared on social media and picked up by Fox News’ Tucker Carlson, which spawned additional posts.

On Twitter, Makary criticized the use of “immunobridging,” saying there was “no justification to bypass rigorous safety & efficacy clinical trials in children.”

“The FDA established with the companies immunobridging criteria to show that the immune responses in these children would be at a level that would likely give comparable protection to what was observed in older people,” said Krause. “And that’s something that’s been done for many other vaccines.”

“Immunobridging is a common way to extend an existing vaccine into new populations,” Natalie Dean, a biostatistician at Emory University who specializes in methods evaluating the effectiveness of vaccines, told us in an email. “We leverage the extensive efficacy and safety data from other populations, and so do not need to start from scratch in generating evidence.”

Dr. Paul A. Offit, a vaccine expert and pediatrician at the Children’s Hospital of Philadelphia and a member of the FDA’s advisory committee, previously told us that the large confidence intervals for the Pfizer/BioNTech vaccine’s efficacy figures meant that little could be concluded from them — but that the antibody data was “excellent” and “enough” to know that the vaccine is likely to work.

He confirmed to us that the data that “convinced” the FDA to authorize the COVID-19 vaccines for little kids was the immunobridging data.

“Specifically, that the titer of neutralizing antibodies found after vaccination was virtually identical to those titers found in the 18-25-year-old age groups where protection against severe disease was excellent,” he said in an email. 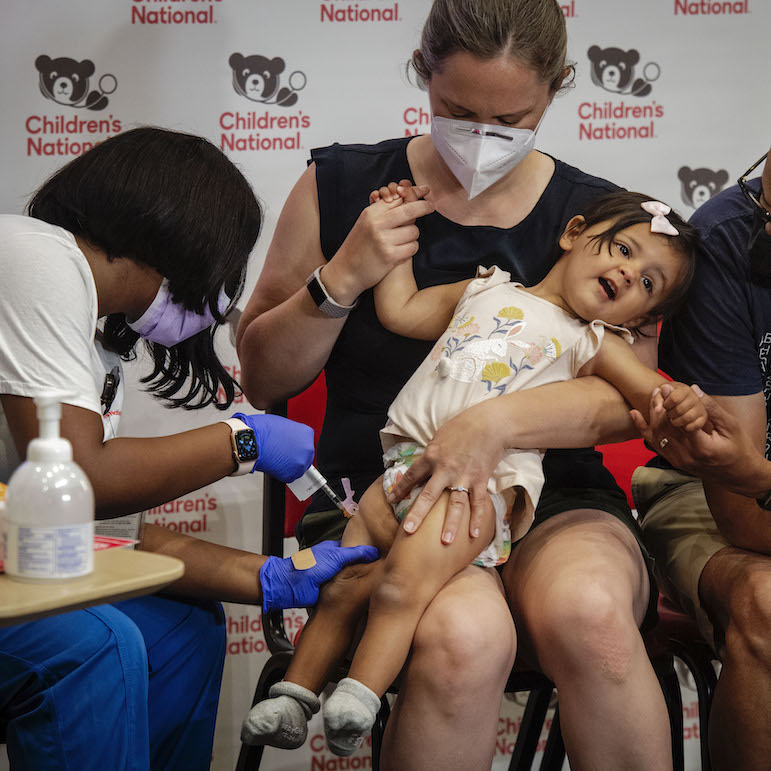 A nurse administers a COVID-19 vaccine to a 14-month-old at Children’s National Research and Innovation Campus, in Washington, D.C., the first day the shot became available. Photo by Bill O’Leary/The Washington Post via Getty Images.

Trial data show that compared with young adults, little kids responded equally well if not slightly better to the vaccine. All or nearly all vaccinated children mounted a neutralizing antibody response against the coronavirus — and at levels comparable if not a bit higher than those of adults (or in Pfizer’s case, 16-to-25-year-olds; see tables 12-15 for Pfizer/BioNTech and tables 55, 56, 79 and 80 for Moderna).

In the evaluations, the efficacy information was supplemental. In the case of Moderna, the data are consistent with some, albeit less, protection against symptomatic infection with the omicron variant compared with earlier variants — a 50.6% reduction in risk for babies and toddlers and a 36.8% risk reduction for kids 2 through 5 years old.

As we’ve noted before, the Pfizer efficacy figures against symptomatic infection were actually higher than Moderna’s — 75.6% for babies and young toddlers and 82.4% for 2- to 4-year-olds — but were highly uncertain.

As Krause told us, though, “the intent of the study wasn’t to come up with that answer.”

“The study was not designed to determine … the efficacy against disease. The study was designed as an immunobridging study,” he said. Because few kids fell ill, “what that meant was that they couldn’t come up with a clear estimate of how effective the vaccine was against what would have mostly been mild disease.”

Krause acknowledged that immunobridging is “imperfect,” since the evaluations typically hinge on more easily measured antibodies, and don’t capture cell-mediated immunity, such as that from T cells. But, he said, the sort of immunobridging used for the COVID-19 vaccines “is something I think most people in vaccinology would not consider to be very controversial.”

Subsequent studies, Krause said, “showed that the vaccine authorized on the basis of this immunobridging approach is protecting children against severe disease.” In March, a study published in the New England Journal of Medicine found that the Pfizer/BioNTech vaccine “reduced the risk of omicron-associated hospitalization by two thirds among children 5 to 11 years of age.”

Indeed, Krause emphasized that the purpose of vaccination is to prevent severe COVID-19 — and that the Substack post is “confusing the notion of working well against mild versus severe disease.”

“Looking at results from mild disease isn’t really giving us a very good picture of how effective the vaccine is and how well it’s doing what it needs to do,” he said, “because the vaccines are being recommended for the purpose of protecting against severe outcomes.”

Krause, who is mentioned in the Substack post, retired from the FDA in November. He penned an op-ed with another departing FDA official and Offit that criticized the agency’s decision to allow healthy younger adults to receive booster shots, given evidence that two doses of the mRNA shots remained protective against severe illness. (We wrote about the booster controversy in September.)

But Krause said he agreed with the FDA’s decision to authorize the vaccine for little kids. He also agreed with the CDC’s recommendation that all children be vaccinated, although he thought the agency could better convey the risks of COVID-19 to children and how the vaccine would benefit kids.

“Some children,” he said, “stand to benefit considerably more than others” — and for them, the “degree of urgency” for vaccination is higher.

Krause noted that severe COVID-19 and related complications, like MIS-C, are rare among children — and are likely even less of a risk now than they were earlier in the pandemic. Still, he said, those events do occur, and given the safety of the vaccine, “the benefits will outweigh the risk.”

“Certainly any child who has risk factors for severe disease, it’s really a no-brainer” to get vaccinated, he said. “But even for children who don’t have these risk factors, it’s certainly a very reasonable decision to get them vaccinated.”

28.06 / Biden Claims Too Much Credit for Decline in COVID-19 Deaths